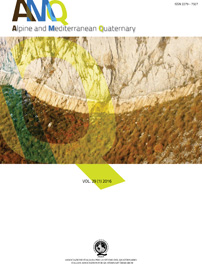 In the Northern Apennine NW to SW oriented structures influence not only main water courses, largely hosted in the Plio-Quaternary basins (Mazzanti & Trevisan, 1978), but also minor streams located close to the present Apennine watershed. Because of their location close the drainage divide, where the exhumation rate is at present faster, these minor river segments have developed in recent time (late Middle and mostly Upper Pleistocene), when the litho-structural discontinuities on which presently they are set, became exhumed. River piracies affecting these streams are even more recent events and were triggered by the on-going regional uplift. In the high Reggio Emilia – Modena Apennines, the alignment of Ozola, Dolo, Dragone and Perticara upper river segments, oriented NW-SE, is controlled by weak-impermeable lithologies outcropping on a thrust front. In the Frignano area, the evolution of the drainage network was deeply conditioned by the presence of lithologies featuring different erodibilities. The Ombrone Pistoiese upper basin drainage is presently featuring a series of river piracies driven by the marked asymmetry of the watershed in that area. Lithologic discontinuities on the one side and Middle-Upper Pleistocene widespread uplift on the other controlled the drainage evolution in the whole area.