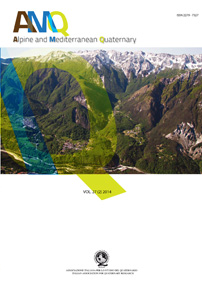 This paper reports on geomorphologic, geochronologic and hydrologic data, interrelated with pollen data from the sediments of the Caprelle caves, located in the Umbria-Marche Apennines. The paper is a contribution to the understanding of cave genesis. The caves open between 795 and 880 m of altitude in the steep slope at the northern margin of the Piani di Monte Lago, and their present entrance is due to the headward erosion of a minor subsequent valley. The two caves belong to the same hydrogeologic system, even if they are not directly interconnected. The Grotta Piccola di Caprelle (GPC) is a ~100 m long tube that feeds a permanent spring, while the Grotta di Caprelle (GC) is a mainly vertical cave (76 m deep), with some sub-horizontal passages at different levels in its lower part; excluding the permanent stream in the GPC, an intense flow of vadose water occurs only in the GC during the wet periods. The geomorphic setting suggests that the cave development begun before the deepening of the hydrographic surface. Excluding abundant clastic autogenic deposits, the cave fills are mainly calcite speleothems, fine-grained floor deposits with a minor sand content, and thin muddy wall coating. Morphological analysis shows that same processes with different intensity acted several times during the history of these caves. In particular, in GC the predominance of vertical water flows has produced an overlapping of forms and deposits, making difficult the stratigraphical analysis of continuous sequences. Calcite and sediment samples were dated with the U/Th method. They showed that the chemical deposition inside the caves had occurred since before 92.5 ka BP, when the carving and enlargement of the caves by water flow action had already allowed the formation of concretions. The genesis of the Caprelle caves has to be placed at a moment preceding this date, when cave morphology was already similar to the present-day structure. An iron-manganese sediment sample dated to 37.6 ka BP, and the overlying thin crust of calcite on the wall gave an age of 28.4 ka BP. Pollen analysis of the sediment contributed to the reconstruction of the environmental context and permitted some inferences on climate. Pollen spectra suggest, in fact, that the sediment containing pollen, together with gravels and sand, might have episodically deposited during short dry/cold, and probably wet/cool climatic phases, as expressed by steppe, grassland and a poor woodland cover.

How to Cite
Galdenzi, S., Loreti, M., & Mercuri, A. M. (2014). AN INTEGRATED RESEARCH ON THE CAPRELLE CAVES (CENTRAL ITALY): GENESIS AND PALAEOENVIRONMENTAL INFERENCES FROM THE UPPER PLEISTOCENE DEPOSITS. Alpine and Mediterranean Quaternary, 27(2), 105–118. Retrieved from https://amq.aiqua.it/index.php/amq/article/view/76
Issue
Vol. 27 No. 2 (2014)
Section
Articles