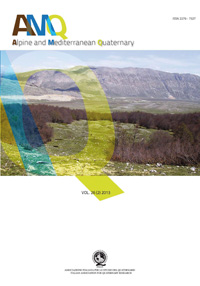 San Giacomo Valley is located in the Central Alps, and cross-cuts the alpine chain from N to S. Geologically, it is dominated by the Tambò and Suretta alpine nappes, which influence the valley morphology: its southern part has regular slopes, whereas its northern part shows flat topographies correponding to the thrust surfaces of the Tambò nappe. Structural and geomorphological analysis highlighted the tectonic-structural origin of the valley. Although the alpine valleys network changed during orogenesis, the morphology of San Giacomo Valley was only little modified at least since the Miocene. The glacial erosion had negligible influence in shaping the valley forms. The large dimension of the glacial erosional morphologies in San Giacomo Valley can not be related with certainty to the last glaciation, but to glaciations in general, whereas small erosional morphologies and the depositional morphologies are most probably the result of the last glaciation. The observations carried out on glacial morphologies and the sedimentological study of tills indicate that San Giacomo Valley, at the last glacial maximum, was the accumulation zone of San Giacomo glacier. From the trimline evidences, both the ice extension in the valley at the LGM and the longitudinal profile of the glacier were reconstructed. The valley at the glacial maximum hosted a single glacial tongue, with the exception of the Truzzo-Lendine glacier, which was suspended on the main glacier. The relationship between the San Giacomo and the Engadina-Bregaglia glaciers is here also reconstructed. At the junction of the two glaciers, in Chiavenna Valley, the Engadina-Bregaglia glacier had higher elevation and larger mass than the San Giacomo glacier. South of San Giacomo Valley, in Chiavenna Valley and in what is today upper Lake of Como, the San Giacomo glacier was squeezed against the right valley slope, but then continued southward for some kilometers as a distinct glacier tongue. This inference is supported by the distribution of tills, which contain lithotypes sourced from the San Giacomo Valley. Only during advanced stages of melting the San Giacomo glacier tongue disappeared. The morphologies of the glacial melting phases were here used to reconstruct the evolution of the glacier tongues of the main and lateral glaciers, as well as to reconstruct their relationships. Through the deglaciation, the accumulation zone gradually shrank and the ablation zone expanded, with contemporaneous upstream shifting. Through the deglaciation, lateral glaciers parted from the major glacier and expanded, reaching their maximum extensions during the retreat of the main valley glacier. The recognizable retreat phases do not identify all the steps of glacial phases occurred, but only those whose sedimentological and morphological evidence has remained. The building of lateral moraines or the deposition of erratics occurred during minor glacial advances, which may have not had the same morphologic evidence throughout the valley.