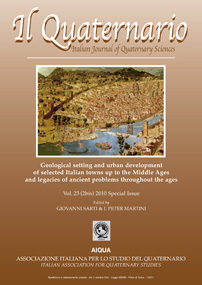 Mozzi P. et al., Palaeohydrography and early settlements in Padua (Italy). (IT ISSN 0394-3356)
This paper concerns the palaeohydrographic and geomorphological evolution of the alluvial plain around Padua during the last millennia, and the relative implications for the development of early settlements in the present urban area.
The first archaeological evidences in Padua date to the late Bronze Age (1400–1000 BC). Since the early Iron Age (9th century BC) the
settlement experienced a progressive expansion and in the 6th century BC it was already an important urban centre. In the 2nd century BC Padua became a Roman municipium, being one of the most important cities in NE Italy. Latin historians wrote that it was crossed by a large river, called the Meduacus, which was identified with the Brenta River in previous archaeological studies. The Brenta River is an important Alpine river that now flows about 5 km NE of Padua. Since the Middle Ages the Bacchiglione River, a minor course
partly fed by ground-water, has been flowing within the city centre along two characteristic meanders; it was artificially diverted only in
the first half of the 20th century in order to protect the city from floodings.
As the recent urban expansion limits the possibility to investigate the urban area with remote sensing and field survey, the investigation focuses on the alluvial plain at the western outskirts of Padua. A 70 km2 area was analysed through the integrated use of vertical and oblique aerial photographs, satellite images, digital terrain models (DTM), field survey and corings.
The most ancient Holocene channel belt recognized in the study area is the Mestrino-Rubano (MR) one, which incised the alluvial plain
formed during the Late Glacial Maximum (LGM). It was formed by the Brenta River between the Lateglacial and 6300 cal BP. A
palaeochannel named "La Storta" was recognized for a stretch of 13 km; it probably was the last active river bed in the MR channel
belt, between 8400 and 6300 cal BP.
The present Bacchiglione River follows another, more recent Brenta River channel belt, named Veggiano-Selvazzano (VS) channel
belt. The meanders in the city centre of Padua most probably belong to this channel belt. Chronostratigraphic data indicate that the
VS channel belt was active in the 2nd millennium BC. This implies that Padua was probably crossed by the Brenta River during the
Bronze Age. A single radiocarbon dating suggests that the VS Brenta River was active also during the 2nd–5th century AD. Such indication brings about the possibility that the Brenta River may have been flowing through the city also during the Iron Age and in Roman times, and that the Bacchiglione River established its present course in early Medieval times. This hypothesis has important implications for the reconstruction of the topography of ancient Padua, but it is based on a weak chronostratigraphy, which should be better investigated in the future. It contradicts geoarchaeological observations, which indicate no evidences of the sedimentary activity of such a large river in the city centre later than the end of the 2nd millennium BC. Moreover, previous geomorphological investigations show that the Brenta River was following the present direction since the beginning of the 1st millennium BC, which means that in the Iron Age and in Roman times the river would flow several kilometres east of the city.