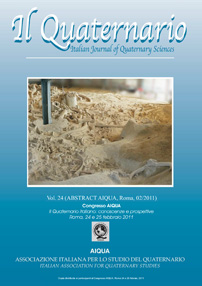 D’Orefice M. et al., First recovery of marine quaternary deposits from geognostic boreholes of the coastal plain of Marina di Campo (Elba Island): preliminary results. (IT ISSN 0394-3356, 2011). Here we describe the preliminary results deriving from the analysis of the S2 geognostic borehole, which was drilled near the town of Marina di Campo (Elba Island). Starting from a ground level at 1.29 m above the sea level, 25 m of Quaternary deposits have been cored. These deposits are probably related to the last glacial-eustatic cycle. In particular, the lower part of the borehole is characterized by gravel and sandy-silt sediments typical of a fluvial environment. They settled during a low-stand phase of the Last Glacial Maximum. These deposits are unconformably covered by coastal marine sands, sandy-silts and biocalcarenites (between -11.90 m and -5.20 m from the ground level) that were ascribed to the last sea level rise. The upper part of the geognostic survey is characterized by dark and plastic organic clays (from -5.20 m to the top). The basal clays are still marine (an age of 4.36÷3.81 ky cal BP has been obtained by radiocarbon dating), whereas those of the intermediate part are brackish (3.97÷3.45 ky cal BP). In the upper part we found clays that settled in a freshwater environment.