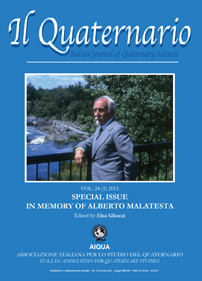 Salari L., Passacantando D. & Rolfo M.F., First data on the latest Pleistocene Mammals from Mora Cavorso Cave (Jenne, Latium, Central Italy). Since 2006 the Mora Cavorso Cave has been object of archaeological investigations, and archaeological and faunal finds have been recorded referable, with some discontinuities, to an interval of time lasting over 13,000 years. The most ancient testimonies till now investigated are referable to the terminal phases of the Late Pleistocene and are followed by various Holocene layers between the Mesolithic and the Middle Age. In this paper the preliminary data related to the large Mammals, together with the hare and the greats Rodents, attributed to the latest Pleistocene are described. Nine taxa of fossil mammals in the “Dig B2” of the room 1 and ascribed to a late Upper Paleolithic cultural horizon (final Epigravettian) have been found: Lepus sp., Marmota marmota, Vulpes vulpes, Mustela nivalis, Sus scrofa, Cervus elaphus, Capreolus capreolus, Rupicapra sp. and Capra ibex. From other places of the cave (the perturbed ground of the room 1 and the “Sinkhole”) the fossil remains of Lepus sp., Lepus corsicanus, Castor fiber, M. marmota, Canis lupus, Ursus arctos, Equus ferus, E. hydruntinus, S. scrofa, C. elaphus, C. capreolus and C. ibex have been also found and these too are referable to the latest Pleistocene. The marmot and the ibex are the most significant species, but is even important the red deer presence, and a particular attention deserves also European beaver, till now not signaled in lateglacial mammal assemblages of central Italy, and the sure evidence of the Italic hare. The ecological requirements of the present taxa allow reconstructing the environment of the Simbruini Mounts and the tall of the Aniene River valley during such period colder than today, outlining a composite landscape with forests and woods alternated with grasslands, rocky bands and scree slopes, and wetlands.