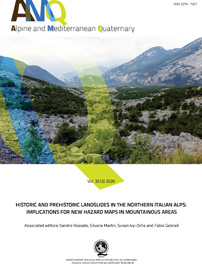 In this study we reconstructed the Buchwiese rock avalanche in the Lienz Dolomites in Eastern Tyrol (Austria). We used a multi-method approach combining geological field mapping, the analysis of digital elevation model (DEM) data, cosmogenic 36Cl exposure dating, and a geoelectrical survey to unravel the detachment mechanisms, emplacement processes and timing of the Buchwiese rock avalanche. According to the results of the 36Cl exposure dating, the event took place at 10.8±0.9 ka during the Early Holocene. The failure of a rock mass with a volume of 27x106 m3 was enabled by a dip-slope in strata of the Kössen Formation (limestone, marls, claystone), Oberrhätkalk (massive to thickly bedded limestone), Allgäu Formation (mottled limestone and marl) and Rotkalk (red nodular limestone and marl), in combination with N-S to NNE-SSW trending brittle faults. We regard fatigue of the fine-grained rocks of the Kössen Fm. (claystone, marl), typical slaking rocks, since the Last Glacial Maximum as the major cause for this catastrophic rock slope failure. With the reconstructed drop height (H) of 1200 m and runout length (L) of 3.5 km, the Buchwiese rock avalanche has a Fahrböschung angle α of 19° and H/L ratio of 0.36. Due to the geological conditions, the initial failure occurred as a plane slide. In the deposition area, we observe strong control of lithological properties, topographic conditions, and substrate materials along the pathway on the morphology and sedimentology of the rock avalanche deposit. Longitudinal ridges, indicating spreading of an unconfined flow, are comprised mostly of massive limestone (Oberrhätkalk). The carapace facies consisting of clast-supported boulders is only developed in areas with limestone (mostly Oberrhätkalk but also limestone of the Kössen Fm.). The body facies in the upper parts are dominated by jigsaw subfacies with a subordinate occurrence of fragmented subfacies in the outcrops. Even in the middle part of the deposition area, we observe the prevalence of the moderately fragmented jigsaw subfacies within large areas of Kössen Fm. debris, which consists of alternating claystone, limestone beds. Such a finding may indicate preferential deformation within the claystone beds. After partial collision with a bedrock ridge and a small jump, the fragmented subfacies dominates. This collision led to the formation of a fan-like megaboulder cluster consisting of detached and fragmented Oberrhätkalk boulders with volumes up to 1000 m3 and a fan-like distribution. The results of geoelectrical surveys reflect different amounts of fragmentation with the carapace facies, showing high resistivity, while the body facies reveals low resistivity. Preserved source stratigraphy within the dilated rock mass indicates predominantly laminar rock avalanche movement. All the morphological and sedimentary evidence supports a dynamic fragmentation model as the best mechanical explanation for the Buchwiese rock avalanche.