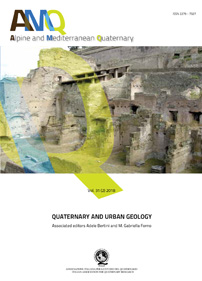 : The Turin urban district (NW Italy), is a flat area, at about 248 m asl, mainly developed on the outwash plain constituted by several outwash coalescing fans connected to the Pleistocene expansion phases of the Susa glacier. Its geological context is well known with three main stratigraphical units described, i.e. Unit 1: Miocene molassic sequence; Unit 2: Pliocene Sabbie di Asti, Argille Azzurre Formation and Villafranchian deposits; Unit 3: Quaternary deposits (outwash sediments). Once these geological features were taken into consideration we focused on the issues related to the impact of geothermal heat pump systems to groundwater in the Turin urban context where a significant number of installations of medium and large sized groundwater heat pumps is present. Local environmental features may influence the development of low-enthalpy geothermal systems and the choice of the most suitable type of system to install. In the case of open loop heat pumps, water re-injected in the aquifer after its use is characterized by a different temperature with respect to the undisturbed aquifer. This thermal disturbance propagates through the groundwater and may affect the temperature of water withdrawals operated by downstream installations. The analyses of Politecnico Turin's Open loop systems have confirmed that the main factors controlling the Thermal Affected Zone (TAZ - thermal plume) are those related to the advective component of heat flow. The piezometric surface was obtained by means of a well and piezometer survey, during hydrogeological investigations. The Turin Politecnico test site attests the relevance of the geological and hydrogeological characterization of the subsoil in the design the GWHP systems in urban areas.