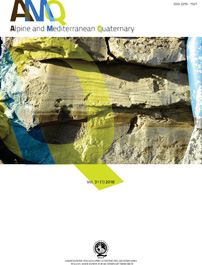 This paper is aimed to illustrate and discuss new data from the clayey deposits collected in the Dunarobba area (Umbria, central Italy), and to better understand some features of the “Fosso Bianco” Unit lacustrine stage inside the South Tiberino Basin, during its latest (presumably Early Pleistocene) phases. Data come from a newly cultivated quarry area (Cava Nuova), only partly considered in previous works; the new section extends well inside the deep lake depositional stage of Fosso Bianco Unit, previously not directly described in outcrop in the Dunarobba area, but only reported from well logs. Selected samples from the Cava Nuova section were analyzed from sedimentological, geotechnical, chemical, mineralogical and biostratigraphical point of view. Sedimentological and geotechnical analyses, including density measurements, particle-size analysis, Atterberg limits and organic matter content, as well as XRF and XRPD analyses, resulted the most suitable techniques to identify the main features, at least for prevailing clayey deposits. Facies analysis and sedimentological data lead to recognize a clear depositional transition from relatively deep to shallow lacustrine deposits, which was only rarely documented formerly through a single section. On the other hand, both geotechnical and mineralogical data indicate a compositional homogeneity for clay sediments, which does not correspond with facies lateral and vertical variability nor with palaeoenvironmental complexity. Despite its preliminary nature, this integrated method looks very promising to characterize the paleodepositional context, and some hypotheses on sediment source were also evaluated. Integrated data from Cava Nuova section, as well as minor well-logs in the immediate surroundings, were discussed and compared with existing data outcoming from the whole Dunarobba area. On the heels of the recent literature, this paper is aimed to put a new light on the complexity of the Fosso Bianco paleoenvironment.